What is the Job Situation in the US, Really?

Every week the US Bureau of Labor Statistics publishes unemployment claims data and every month it publishes data relating to new job creation and the unemployment rate.  These data are fodder for political demagoguery.  Financial markets appear to react sensitively as well to each bit of new data. For example, the monthly data released this past Friday morning was followed by a precipitous 1.6% drop that same day in the S&P 500 stock index

The data do seem confusing though.  For example  it was reported that April nonfarm payroll employment rose by 115,000 which was substantially below the forecast number of 163,000 and well below the number economists estimate is needed to reduce the unemployment rate.  Paradoxically, the simultaneously released unemployment rate was reported to have dropped from 8.2% in March to 8.1% in April.  In fact, despite what has been considered anemic job growth, the US unemployment rate has dropped steadily from its peak of 10.0% in October 2009.

First one needs to understand the sources of the different sets of numbers.  The nonfarm payroll data is obtained by the government surveying approximately 141,000 businesses.  However, the nature of work is changing.  There are more people working as individual contractors, obtaining jobs through Craig's List, etc  Surveys of established businesses might not detect this type of employment.  Thus the business survey could underestimate the number of new jobs being created.

I think a more reliable indicator of the employment situation is the rarely cited employment-population ratio.  This ratio represents the fraction of adults who actually hold jobs.  This measure is less susceptible to the effects discussed above.  Over the period 1948 to 2000 the employment-population ratio rose from 56.6% to 64.4% as the economy prospered and women joined the work force. With the 2001 dot com bust the ratio came down a percent or so but held at the 63% level through 2007. 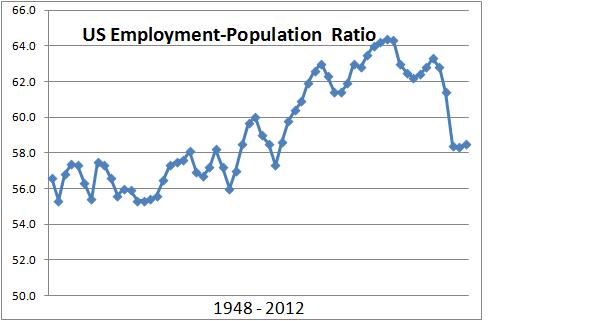 However, the recent financial crisis resulted in the employment-population ratio plummeting to 58.4% in 2009 and there it has remained to this day - 58.4% exactly in April 2012. 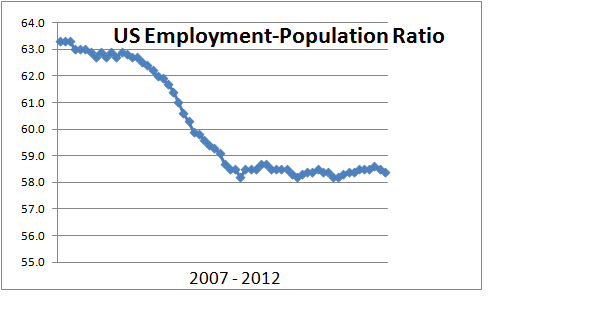 In terms of the employment-population ratio the employment situation in the US has not improved at all in the past three years.  In terms of this statistic the proportion of the adult population who have jobs is nine percent lower than it was in 2000 (58.4 - 64.4)/64.4 = -0.093 = -9.3%.  I don't think that adults in the US have a lower level of employment now because they are feeling so rich that they don't feel the need to work!  It is because they can't get jobs.

In another post I will discuss some hypotheses on why the jobs data are so disappointing and what we might do about it.
Posted by Richard J. Cohen at 4:44 PM